We're on our way toward the submission of a huge update for Don't Run With a Plasma Sword!  This update will contain several key features such as:

- As promised, a fifth level!  Here's a screenshot preview: 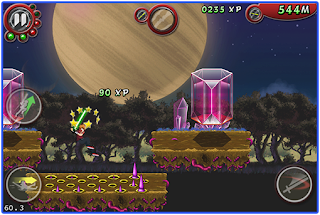 - Adding a 3 stars rating system in story sections (find the hidden atomic gem and avoid getting hurt for a better rating)
- Revamping the level 1 with a nicer environement and more visual variety
- From now on, monsters will be sliced-up when hit, sending bits flying around
(very cool)
- New power-up upgrades (boost the current power-ups and add new ones)
- Reviewed tutorial
- We'll also try to add new mask/hats clothing

Hopefully we'll manage to submit this update in a few weeks, stay posted!