- June 30, 2013
Finally!  Pixel Boat Rush is getting close to its alpha development stage so this is probably a good time to start talking about the game!  From now on, we'll regularly post stories about the main aspects of the game and its development. 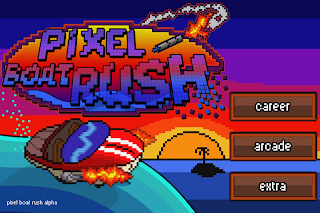 This time we'll simply sum-up the basics.  The game will be a 2-D sidescrolling boat racing game with guns featuring boat destruction pixel by pixel. It will have a 8-bit retro direction both for art and music.

There was no clear influence when the project started but as things settle down, we can now see a bit of Out Run for the ambiance, Excitebike and Tiny Wings for gameplay, Death Rally for Guns vs Racing and Gran Turismo for game progression.


You will be racing pixel boats over a multitude of tracks.  Each track will have a predetermined set of waves and obstacles and the key will be to learn tracks to know when to break/accelerate in order to compete better.  Through action, not only you'll be racing opponents, avoid obstacles, collect coins and power-ups but you'll also have a whole weapons arsenal at your disposal to blast opponents to pieces and defensive systems to protect yourself!


PBR will be playable through a quick-race arcade mode and a career mode. In the career mode, you'll have the chance to pass racing licenses, acquire boats and equipment for its various systems and compete in various racing leagues.  As you progress, you will unlock new licenses, boats, leagues and so on.


In the following posts, we'll be giving more details about the game.  Pixel Boat Rush has been in development for 4 months now.  We could expect a release in 3-6 months, depending on various factors.

Later on, we'll be looking for people to participate to focus groups and the beta. For now, you can help to shape-up the direction of the game by posting your comments in our thread on the Touch Arcade forums