- July 02, 2013
In this post we'll discuss some basic elements of the gameplay as well as controls.  The controls configuration will have 3 buttons + the accelerometer. These controls which will be gradually introduced in the game. 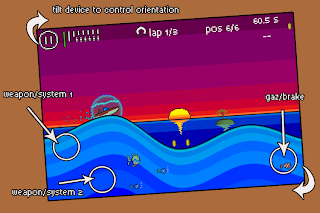 On the water, pressing the gas/brake button will accelerate the boat. Releasing it will make it brake.

In the air, releasing the button will cause the boat to dive faster, giving some sort of control of where to 'land'.

A boat going just at the right speed will 'stick' to the wave without taking off. On the other hand, if the goal is to jump above an obstacle, it will have to speed-up before a wave.

Since the boat can't accelerate in the air, one key strategy will be to brake just before a wave and re-accelerate just after to optimize the lap time.  Of course, this will depend on the track configuration since it might be faster to simply jump over a series of waves.

The idea was to try to capture the main element of racing; take a curve at the right speed, without having a context as punishing and difficult as car racing. The objective is to have a resulting game mechanic which is easy to learn, but hard to master.

Tilting the device in the air will control the orientation of the boat. This can be used to aim at opponents in the air and to perform discoverable 'style figures' like backflip and frontflip, which will give extra coin bonus during a race. Landing upside down will slow down the boat.